Since Grace Cathedral’s early humble beginnings, the congregation increased to more than 275 of the finest members anywhere. Though space will not allow us to list all of the early church members, we do recognize the generosity and the willingness of those early members who worked and served in various ministries, boards, committees and choirs.

We further acknowledge the faithful leadership of the various department chairpersons. In order to accentuate the church services, the music department was founded by Pastor Wilcox and his daughter Jeanne served as Minister of Music. The Voices of Cathedral initially rendered music during the service on February 4, 1980. The Voices of Cathedral, the Combined Youth Choir, the Grace Cathedral Mass Choir, the Gospel Chorus and the Male Chorus have rendered service over the church’s rich musical history.

Read About Our Ministries 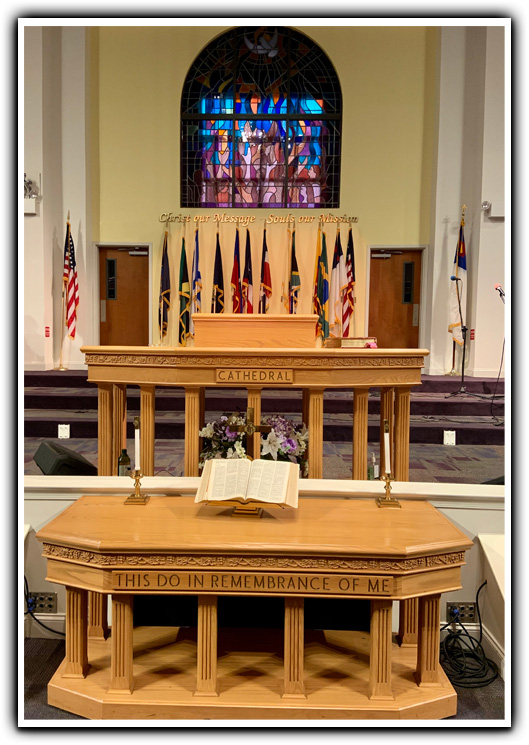 In November of 1979, the Lord inspired our Pastor, the then, Elder Jerome S. Wilcox to establish a work for Him. Within a week God proved Himself to His manservant by allowing him to procure the Mt. Ararat Primitive Baptist Church. However, before the church’s inception Elder Wilcox’s mother, Mother Shirley V.irginia Echols, was led by God to pray for his ministry. After prayer she prophesied, “The Church is in this House!” Concurrently, the inaugural church service was held in the home of Elder and Missionary Wilcox on Sunday, November 25, 1979.

Our Pastor has thrived to preserve the sanctity of worship and Christian dedication through prayer, bible study, fasting and consecrations, evangelistic & deliverance services, religious films, and revivals have been conducted by noteworthy anointed men and women of God down through the years, such as the late Bishop Charles Williams, Prophet Brian Mosley, Pastor Milton Rochford, the late Mother Rosie Steward, Evangelist Raymond Broach, the late Evangelist Harry Davis, Evangelist Juanita Sapp, Evangelist Jackie Smith and Evangelist Tracey Troy and they were
instrumental during the church’s formative years of development.

Troy and they were instrumental during the church’s formative years of development. Holy Communion was distributed bi-monthly and remains an intricate part of our itinerary utilizing the vessels, linens and white Bible
which were revered possessions of the late Bishop H. J. Echols, Senior Bishop of the First Born Church of the
Living God, Inc.

Marching into the building in 1986

The culmination of our intense building fund drive was in evidence that the contractor, Mr. Andrew J. Praskai, of
Planned Housing Construction began the actual excavation of our current site and construction of our original building on November 23, 1984. The ground breaking ceremony which ensued on Sunday November 25, 1984 was a fitting conclusion of the Thanksgiving weekend. Due to unseasonably good weather, the construction company was able to lay the foundation and complete the outer structure within a matter of months. Though there were some delays, we
praise God for the final completion of work on June 1, 1986, permitting us to have the first service in our new church on our official opening day ceremonies on June 22, 1986 at 9:30 a.m. with a march to the new church building. We gathered at Pennington and Titus Avenues, the site of the former Grace Cathedral Annex and walked to the new church, located at the corner of Calhoun and Southard Streets. Our ribbon cutting ceremony took place on the church grounds. Immediately following the ceremony we entered the church for the 11 o’clock service. Our afternoon worship began 3:00 p.m. and was highlighted with the dedication ceremony.

A week of dedication services were held after official opening day, from Monday June 23, 1986 thru Friday
June 27, 1986. The litany and prayers of dedication were given nightly; Monday the Memorial Stained glass window was presented to the church by Deacon and Mrs. Walter Jackson and family in memory of their daughter Jean Renee Jackson. The Pulpit and Pulpit Bibles were dedicated on Tuesday, Wednesday, the Musical instruments and Tape
Ministry, Thursday, Pews and Friday the American and Christian flags were dedicated unto God.

The seventh church anniversary marked the first celebration in our new edifice. The first five months that the Grace family was in the new church building was a period of transition. To meet the needs of our ever expanding congregation, many activities and programs were instituted. A Board of Christian Education was instituted by our Pastor. Under this board the Scholarship Committee was functioning, the Sunday school was reorganized, a New
Members Class was in session, and The Cathedral Light Newsletter was published monthly.

There was a Culinary Arts Committee, Prayer Breakfast Committee, Youth Altar Workers, Youth Outreach Committee and a Tape Ministry that were functioning and many other committees were planned. A yearly Youth Conference has also been functioning.

During the 1986-87 church years, Grace continues to build and expand its ministries. Our Pastor has instituted a Junior Deacon Board and the Aspiring Missionary Auxiliary. Two church conferences were held this year. The Men and Women of Grace celebrated their first Annual Fellowship Conferences. The women of the church held their
conference in March and the men’s conference convened in the month of September. God blessed mightily in both conferences.

The highlight of the 1987-88 Church years was the official opening of the Grace School of Christian Education. Its first semester commenced on Wednesday, September 16, 1987 with Minister Albert Oliver as School Director, The scripture theme of the Bible School, “I Have esteemed the Words of His Mouth More than My Necessary Food”. Many of the saints were blessed and grew in the knowledge of the word of God.

Continuing throughout the years

Our Annual Spring Revival was conducted by the late Mother Rosie Steward of Philadelphia, PA in the month of March. We were also blessed during the Christmas revival by Evangelist Jackie Smith of Allentown, NJ. In addition, we have had many wonderful Evangelistic Services held on the 1st Friday of each month. Some of the early speakers were Prophet Brian Mosley, Evangelist Gloria Gaines of Baltimore, MD, and Evangelist Mark Chironna of Longwood, FL. The Intercessory prayer group was formed. As an outgrowth of prayer, this group became the nucleus of the Women’s Ministries which was instituted during the year 1988. The meetings were held quarterly in January, April, August and October. Anointed women of God came and ministered to our many speakers at our
Women’s Ministries Seminars. Our First Speaker was Elder Leatrice Caldwell, Founder of Christian Women’s Seminars, Burlington, NJ, and also Evangelist Mary Gay, founder of Prayer Vigil of Philadelphia, PA and Elder Vernell Ricks of Willingboro, NJ. The Women’s Ministry expanded our renowned Annual Church Conference which later became the Annual Abiding in the Anointing Conference. The Young Men’s Fellowship was established; they met monthly and now evolved into the Men’s Prayer group which meets every Saturday morning at 8:00 a.m.

The Annual Youth Fellowship Conference has been a blessing each year, held in July. The Mass Choir of Grace Cathedral held their Choir Anniversary in October, annually and now has evolved to the Bishop Choir which has recorded their 4th CD release..

Throughout the years our church and congregation has grown tremendously. Our Pastor is a renowned anointed
gospel preacher was elevated to Bishop. Bishop Wilcox has received an Honorary Doctorate Degree in Theology
from the Shiloh Theological Seminary of Stafford, Virginia. In June 1997, he retired from the Ewing Public School system with over thirty-five years of service. Bishop Jerome S. Wilcox presently serves as Senior Bishop Emeritus of the Abiding In the Anointing Assemblies International, Inc., under the leadership of Bishop John D. Brown, Chief Presiding Prelate and where he remains the full time Pastor of Grace Cathedral Fellowship Ministries, Inc., of Trenton, New Jersey. In November 2006, we have erected our second Sanctuary, which was dedicated in 2007. The church’s aggressive outreach to minister to countless individuals has lifted many families in the Trenton community and surrounding areas.

Keep Up With Us

Join Pastor every Wednesday at 12pm

A time of comprehensive and through Bible Study.

In depth research on what the Word says about specific topics.

Get knowledge to help you witness and live a holy life.